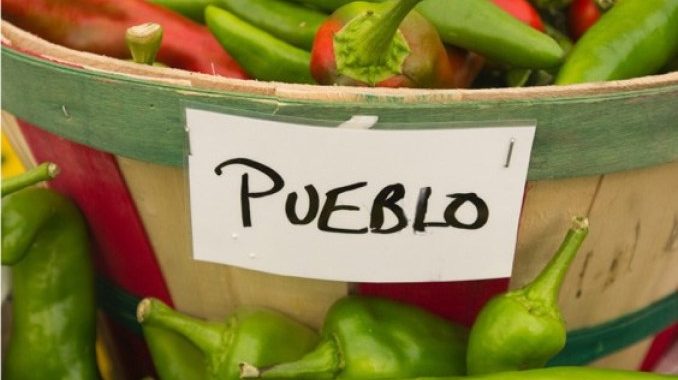 That Whole Foods Markets replaced Hatch Chile at many of their stores is great news for local farms and Pueblo’s reputation as the Chile producing capitol of Colorado. The closest store from Pueblo, however is in Colorado Springs, but locals know it’s a short drive to the county to buy Chile from local farms and other local venues where they can stock up on freshly roasted chile every fall and frozen chile the rest of the year.

While Whole Foods says Pueblo Chile to is a hot item at their stores in the Rocky Mountain Region, but the grocer will still sell New Mexico-grown peppers in New Mexico itself.

A Denver Post story reported about the ongoing New Mexico-Colorado Chile debate, reporting the chain’s plan to replace Hatch Chile with Pueblo Chile in some regional stores, an announcement by Whole Foods that will add fuel to the fire of which state has the best Chile.

They reported that Whole Foods admitted that they prefer Colorado’s Pueblo Chiles over New Mexico’s Hatch chiles. According to an article in the Albuquerque Journal, Whole Foods told a reporter that the decision in Colorado was part of the region’s push to highlight local produce — “even ‘hyper’ local products.”

Nick Martinez, a marketing specialist for Whole Foods in Albuquerque said, New Mexico stores, “will continue to source green chile from New Mexico only,” he added. “In fact, all (New Mexico) stores will be free of Pueblo, Colo. chile.”

Two stores in Albuquerque and two in Santa Fe currently sell peppers from Seco Spice out of Berino, N.M. He said the store also has identified a new source, Los Lunas’ Armijo Farms, and will also get some from Hatch growers. One media source said despite New Mexico stores continuing to sell their own Chile, the news that Whole Foods switched to Pueblo Chile in Colorado is enough “to raise a New Mexican’s heat index.”

The Denver Post reported: “The Pueblo Chile has been overlooked,” said Steve Lunzer, regional produce coordinator at Whole Foods Market, who last week announced the store is dropping the Hatch brand in favor of Pueblo chiles. “Hatch is all over the place, It’s such a commodity,” Lunzer said.

Whole Foods plans to put 125,000 pounds of Pueblo chiles throughout the Rocky Mountain region, including in Colorado, Kansas, Idaho and Utah.
According to the Denver Post, Chris Markuson, director of economic development for Pueblo County in Colorado, predicts a healthy economic benefit from the new strategy.

“We’re estimating the annual increased economic impact (of the Pueblo green chile market) will be $1.1 million in 2015, and that growth rate will increase by 9.4 percent every year,” he said.